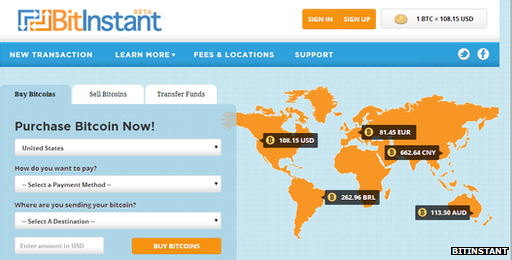 The BitInstant Bitcoin exchange is based in New York

The operators of two exchanges for the virtual currency Bitcoin have been arrested in the US.

The Department of Justice said Robert Faiella, known as BTCKing, and Charlie Shrem from BitInstant.com have both been charged with money laundering.

The authorities said the pair were engaged in a scheme to sell more than $1m (£603,000) in bitcoins to users of online drug marketplace the Silk Road.

The site was shut down last year and its alleged owner was arrested.

Mr Shrem was arrested on Sunday at New York’s JFK airport. He was expected to appear in court on Monday, prosecutors said.

Mr Faiella was arrested on Monday at his home in Cape Coral, Florida.

Bitcoin exchanges are services that allow users to trade bitcoins for traditional currencies.

James Hunt, from the US Drug Enforcement Agency, said in a statement: “Hiding behind their computers, both defendants are charged with knowingly contributing to and facilitating anonymous drug sales, earning substantial profits along the way.

“Drug law enforcement’s job is to investigate and identify those who abet the illicit drug trade at all levels of production and distribution, including those lining their own pockets by feigning ignorance of any wrong doing and turning a blind eye.”