October 28, 2011. Hammerstein Ballroom. Shpongle Live. I’d been waiting for this moment for years. After an unfortunate incident that resulted in my missing basically all of their monumental set at Camp Bisco over the summer, I was more than ready to take on all the night had to offer. After meeting my girlfriend and going over to a friend’s house after work to get into our “out-of-this-world” Halloween attire, we rendezvoused with some friends at the train station, a few more outside of Penn Station, and were finally ready to walk the few blocks to the always cosmic Hammerstein Ballroom on the last official day of the Mayan calendar. 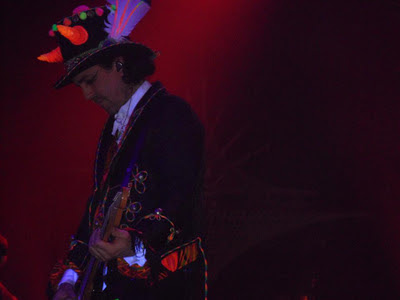 Upon arrival at the Hammerstein, a personal favorite of mine despite the heat that tends to be contained inside, one could already feel the magic in the air. A long line of costumed ragers were waiting outside, anxious to get in, some there since the early evening. After a quick but thorough security check, we were inside. Already on stage was DJ/producer Rain, who goes by the moniker Phutureprimitive. I’ve been fortunate enough to see him twice before and let me tell you, he’s not an act you want to miss. His smooth, psychedelic brand of dub and futurebass, oftentimes tastefully sprinkled with dubstep, can be described as nothing short of explosive and I’m hard-pressed to think of a better opening artist for an event such as this one. Shortly after donning the mask from V for Vendetta, he dropped a crunchy and appropriately haunting remix of Gary Jules’ “Mad World,” officially setting the mood for the rest of the evening. Always a gentleman, before walking offstage Rain pulled out Simon Posford, the host for the evening, from behind the stage curtain for a 3,000 person sing-along of “Happy Birthday.” During easily the largest “Happy Birthday” I’ve ever been a part of, Simon, decked out in an admiral’s uniform with devil horns that was nothing short of cartoonish, looked absolutely thrilled to be spending his 40th birthday with us. Judging by the volume of the crowd, the feeling was blatantly mutual.

After a forty-five minute waiting period, the main event had arrived! Simon was joined on stage by 12 other musicians, including Raja Ram, the other mastermind behind Shpongle who’s cartoonishly shamanistic outfit rivaled Simon’s, the legendary Joe Russo on drums, and the ever brilliant Encanti on computers. The band teased some eerie samples before jumping into the infectious title track off of 2009’s Ineffable Mysteries from Shpongleland, “Ineffable Mysteries.” As soon as the baritone horn line dropped, the crowd was sent into a frenzy, a breathing pulsing organism filled with ghoulish figures and neon flashes. A totally immersive experience, the Shpongle Live act, only performed fourteen times previously in their thirteen-year history including this past summer’s performance, is about more than just music. Along with the giant projection screen above the band, the musicians on stage were accompanied by an array of characters and effects. Ranging from a giant, rainbow, three-armed slinky to blacklight painted tribesmen that looked like something out of Avatar, Shpongle’s full band act is a sight to behold that even gives Cirque de Soleil a run for their money.

As the show progressed and shifted, so did the energy and everyone in the room. Completely entranced by the performance, the 3300 occupying Shpongleland went ballistic during upbeat songs like the Flamenco-infused “Dorset Perception” and slowed down for songs like “Nothing is Something Worth Doing,” a personal favorite of mine also off of Ineffable Mysteries from Shpongleland. A tune that was not played at Camp Bisco’s inaugural United States performance, “Nothing is Something Worth Doing” features Manu Delago in his only appearance of the evening for the melody of the track, played on a hang. A hang is a percussion instrument made of steel that almost looks like a handheld UFO. Invented approximately a decade ago in Switzerland, this unique instrument has several holes to allow for different tones that create an incredibly beautiful soundscape. This song, specifically the downtempo hang line, could easily be on the soundtrack to an intergalactic tour a la Jodie Foster’s extra dimensional journey in Contact, especially when played by an expert like Delago, who was decked out as a pirate. Other highlights of the show for this Shpongolian include “When Shall I Be Free?” and “No Turn Unstoned,” featuring the wondrously haunting vocals of duo Michelle Adamson and Hari Om; the jungle trance chaos of “Levitation Nation” that saw Russo going absolutely ballistic on the kit as rainbow confetti rained over the equally ballistic crowd; and the classic dub-meets-psytrance “Star Shpongled Banner,” an older fan favorite highlighting Raja Ram’s skills as a flautist with a middle eastern flair. Another song that was left off the Camp Bisco setlist, this anthem united the crowd in a psychedelically cultish sing-along, myself included. The pinnacle of the evening, though, came during the first song of the “encore,” Tales of The Inexpressible’s “Around the World in a Tea Daze,” a title too appropriate for the end of the insanity we were partaking in. While no one had predicted the raining confetti of “Levitation Nation,” the crowd had been anxiously waiting on the awesome amount of balloons spotted during the light of Phutureprimitive’s set in giant nettings hanging from the top balcony, speculating all show at what point and during what song they would come down during. Well, “Around the World in a Tea Daze” was it, and I could honestly say it was one of the most beautiful things I’ve ever seen. 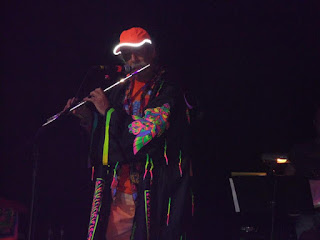 After such an incredible night, the one true disappoint was its conclusion. I had been hoping for either Simon or Raja to do a DJ set after the live show, since Simon had spun an unanticipated and thus practically empty Hallucinogen set after the Shpongletron experience at Best Buy Theater back in April of this year that resulted in one of, if not the most insane and intimate dance parties I’ve ever had the pleasure of being a part of. Alas, the gang called it quits for the evening after a solid two and a half hours, a well-deserved break considering they had to hop on a plane to Oakland to play at the Fox Theater the following evening. Our star of the night, Simon Posford, had organized an birthday celebration unlike any other. From using tweaked microphones alongside the incredibly charismatic visionary Raja Ram to create incredibly trippy and distorted vocal samples, to joining Encanti on the computers, to playing guitar, Mr. Posford is one talented individual. Looking like a madman conducting the devil’s orchestra, the birthday boy was truly a spectacle. While Simon is often credited as the mastermind behind Shpongle, it would be ill-advised to not credit everyone involved in this performance, musicians and techies alike. I am eternally grateful to the entire Shpongle crew yet can’t help but be upset by the idea that this may be the last time the United States is given the opportunity to host something so special. One could only hope that plans for Mr. Posford’s 41st fall through and he’s generous enough to share his birthday with us again next year. I know I am.

Shpongle Live: Halloween or Shpongleween?
By: Adam Scott Shpongle is a psychedelic downtempo/psybient music project formed in 1996 in England. Since then, Simon Posford (Hallucinogen) and Raja Ram (The Infinity Project) have collaborated with artists from ...
READ MORE
Shpongle Live: Halloween or Shpongleween?
Like this or use the bottons below to share: