Like this:
As one of the most iconic event brands in the world and the number one party in Ibiza, its no surprise that just two years into their NY residency, elrow has grown from attracting 800 attendees to 7,000. Focused solely on creating an immersive, enjoyable and transcendent experience for all of its attendees, elrow is back this Saturday, July 27 for a 10-hour multisensory bacchanal known as Rollywood. This immense summer fiesta will take over the only venue capable of bringing elrow to life fully, The Brooklyn Mirage. 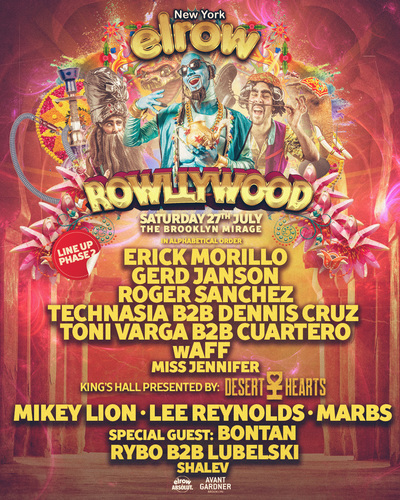 elrow announced its phase 2 lineup for their biggest and most vibrant US event to date featuring two of the most prolific producers in house music and legends of New York’s glory clubbing days, Erick Morillo and Roger Sanchez. While Morillo will be making his stateside elrow debut, Grammy winner, and Ibiza staple Roger “S-man” Sanchez will be making his worldwide elrow debut and playing an unmissable house classics sunset set. Hedonistic cultures will collide as East Coast meets West Coast when LA’s renowned burner crew Desert Hearts takes over Kings Hall until early morning. To accommodate the extra talent and fans, Rowllywood will expand into Avant Gardner as well as Brooklyn Mirage.

Also announced in phase two are German house and disco don Gerd Janson, French fusion master Technasia who will be doing a b2b set with Dennis Cruz, and Spain’s Cuartero who will be going b2b with elrow resident Toni Varga. They join phase one talent including New York favorite wAFF, Miss Jennifer who will be playing a special birthday set, Bontan who has released several cuts on Hot Creations, Israel’s Shalev, and psychedelic synth heads Rybo and Lubelski who will be going b2b.

Themed after a Bollywood  film production, Rowllywood will feature a mind-blowing set, a spectacular Taj Mahal with a pantheon of gods and goddesses overlooking the revelry. Thrown into the party are snake charmers, fakirs, street traders and, if his carpet doesn’t get testy, maybe Aladdin will fly in from Persia for a good time. The film directors will be following you with their cameras, so it’s time to put on your veils, saris, henna and silk. You are center stage in this mega production and Mumbai is waiting.