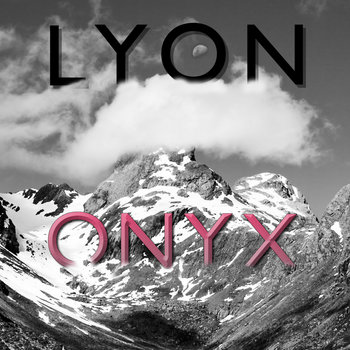 The dictionary defines the word “onyx” as a semiprecious variety of agate with different colors in layers. In nature, onyx is created by the extreme heat and pressure of volcanic activity. Its various overlapping bands of color makes it one of the most uniquely gorgeous gem stones in the world. Similar to the stone that inspired it’s name, LYON’s latest release ONYX is an excellently produced collection of songs that together create a powerful symbol of unique majesty.

Danial Scott Lyons a.k.a. LYON has proven himself as an outstanding musician as the drummer for the well known band SOLARiS. As LYON, Danial introduces us to a meticulous electronic producer who weighs every detail with an inspired approach. ONYX is a powerful testimony of raw emotion that is highlighted by some of the most euphoric plateaus but simultaneously tempered with melancholic undertones. This album ventures into the darker realms of minimal and down-tempo EDM. The entire album moves with a distinct sense of artistry and you can really feel how personal this album is to its creator, and I believe that genuineness shines through these meditative tunes.

ONYX begins with ‘Animal’ which sets an early tone for this stripped down minimal masterpiece. The song starts off with a sweet melody that sits angelically on top of a smooth bed of kick push percussion. LYON’s use of airy pads and quick piano strokes gives this opener a mystifying appeal. ‘Maximus’ picks up the energy with a plodding bass line that is accented by more playful piano and synth work. The album’s shining gem in my opinion is the six minute long ‘Crush Depth’, which morphs and grows like a living creature. LYON does a masterful job of hypnotizing his listener with full bodied sounds that are clearly crafted from scratch. By the time you reach the triumphant apex of ‘Crush Depth’ you will be securely strapped into the mind-bending voyage that is ONYX. As LYON takes you on this journey you can feel that each note is hit perfectly and every kick is exactly where it should be. In ‘Without Her,’ Lyon shows off his ability to couple phenomenal piano and string instrumentation with the serene synths that characterize the rest of the album.

ONYX is a techy, stripped down, thoughtful and pristine piece of work. Usually if songs fade out the album feels disjointed and lacks flow, but ONYX is such a cohesive vision that each song feels like a new chapter that builds poetically on the last. This new release by LYON is exactly what many have been clamoring for in the EDM community. I thoroughly enjoyed this progressive new sound and hopefully LYON will gain some much deserved attention for his solo endeavors. You can stream and name your price for a download of ONYX below, be sure to support great underground music!